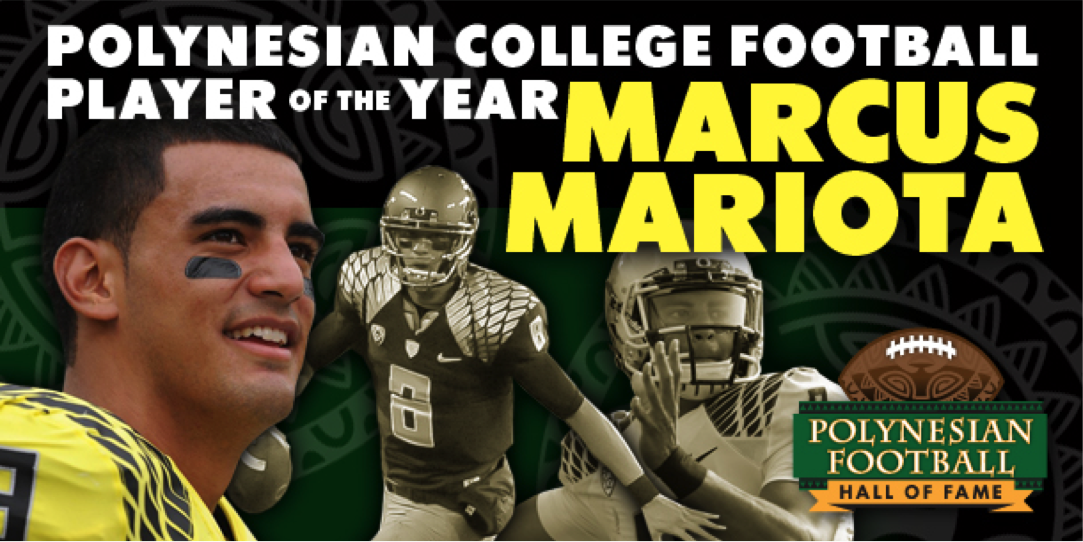 Honolulu, HI (December 9, 2014) – University of Oregon junior quarterback Marcus Mariota has been selected as the inaugural recipient of the Polynesian College Football Player of the Year Award presented by Starwood Hotels and Resorts.

(CLICK HERE FOR A VIDEO MESSAGE FROM MARCUS MARIOTA)

The 6-foot 4, 220-pound, Mariota is a front-runner to become the first Heisman Trophy winner of Polynesian Ancestry.  He was born in Honolulu, Hawai’i to Toa Mariota and Alana Deppe-Mariota and is of Samoan descent.

Mariota helped lead the Ducks to an 11-1 regular season record, the Pac-12 Championship, and a berth in next month’s College Football Playoff.  His 2014 campaign was a record-breaking one.  He finished the season with the top Quarterback Rating in the Nation, was responsible for 53 touchdowns (38 passing, 14 rushing, 1 receiving), led the nation with 4,452 all-purpose yards and was named the Pac-12 Conference Championship Game Most Valuable Player.

“Marcus has orchestrated one of the most prolific offenses in college football this season,” Sapolu said.  “He truly represents the very best of our Polynesian culture.”

The formal presentation of the Polynesian College Football Player of the Year Award will be held during the Polynesian Football Hall of Fame Enshrinement Weekend at the Celebration dinner on January 23, 2015.

“On behalf of the Polynesian Football Hall of Fame Board of Directors, we congratulate Marcus on this historic accomplishment,” said Tanuvasa.  “He is a great role model for our youth and a source of great pride for Polynesian’s everywhere.”


About the Polynesian Football Hall of Fame