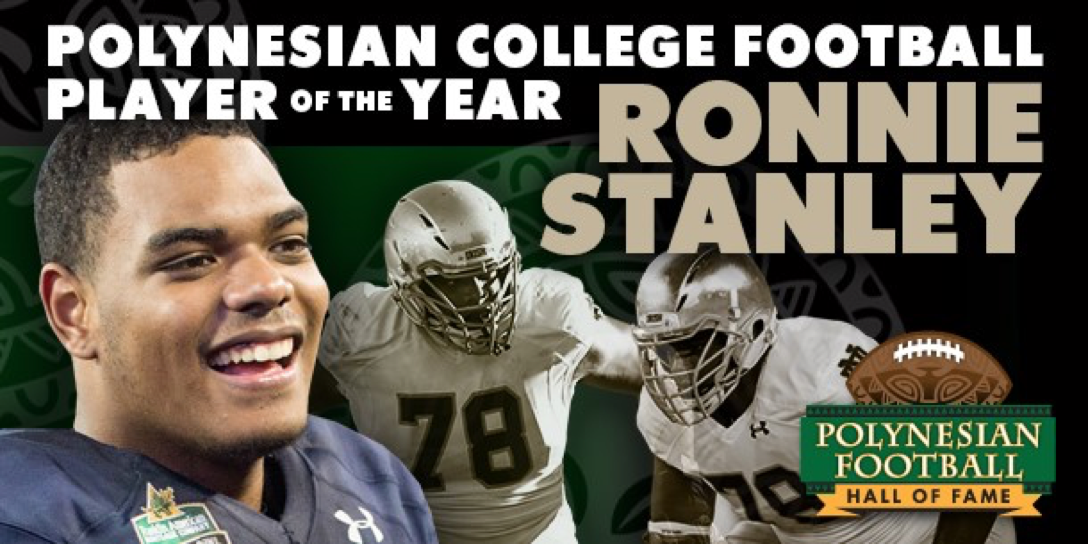 Honolulu, HI (December 8, 2015) – University of Notre Dame Offensive Lineman Ronnie Stanley has been selected as the 2015 recipient of the Polynesian College Football Player of the Year Award.

(CLICK HERE FOR A VIDEO MESSAGE FROM RONNIE STANLEY)

Polynesian Football Hall of Fame Co-Founder Jesse Sapolu made the announcement at a Honolulu press conference today.  The Award is presented annually to the most outstanding college football player of Polynesian ancestry that epitomizes great ability and integrity.  Former University of Oregon, and current Tennessee Titans Quarterback, Marcus Mariota was selected as the inaugural recipient of the Award in 2014.

The 6-foot-6, 315-pound Las Vegas, Nevada native was born to Ron and Juli Stanley and is of Tongan descent.  “I’m 50 percent Tongan,” Stanley said. “My mom was born in Tonga.  I’m very proud of our culture and honored to be a part of it.”

Stanley was the cornerstone of the Irish offensive line leading Notre Dame to a 10-2 regular season record and a final overall ranking of #8 in the country.  Individually, he finished the regular season with a 97.3% pass block success rate.  As a team, the Irish put up impressive rushing numbers, including 2,582 rushing yards (215.7 yards per game), 27 rushing touchdowns (2.25 per game), 5.76 rushing yards per carry average (a modern school record) and had three different players with over 100-yard rushing games.

“On behalf of the Polynesian Football Hall of Fame Board of Directors and the Selection Committee, we congratulate Ronnie on this historic accomplishment,” Sapolu said.  “He truly represents the very best of our Polynesian culture.”

The formal presentation of the Polynesian College Football Player of the Year Award will be held during the Polynesian Football Hall of Fame Enshrinement Weekend at the Celebration Dinner on January 29, 2016.

About the Polynesian Football Hall of Fame

The Polynesian Football Hall of Fame honors Polynesia’s greatest players, coaches and contributors.  As a 501(C)(3) organization, the Hall of Fame preserves and promotes Polynesian football history and awards scholarships for Polynesian student-athletes.