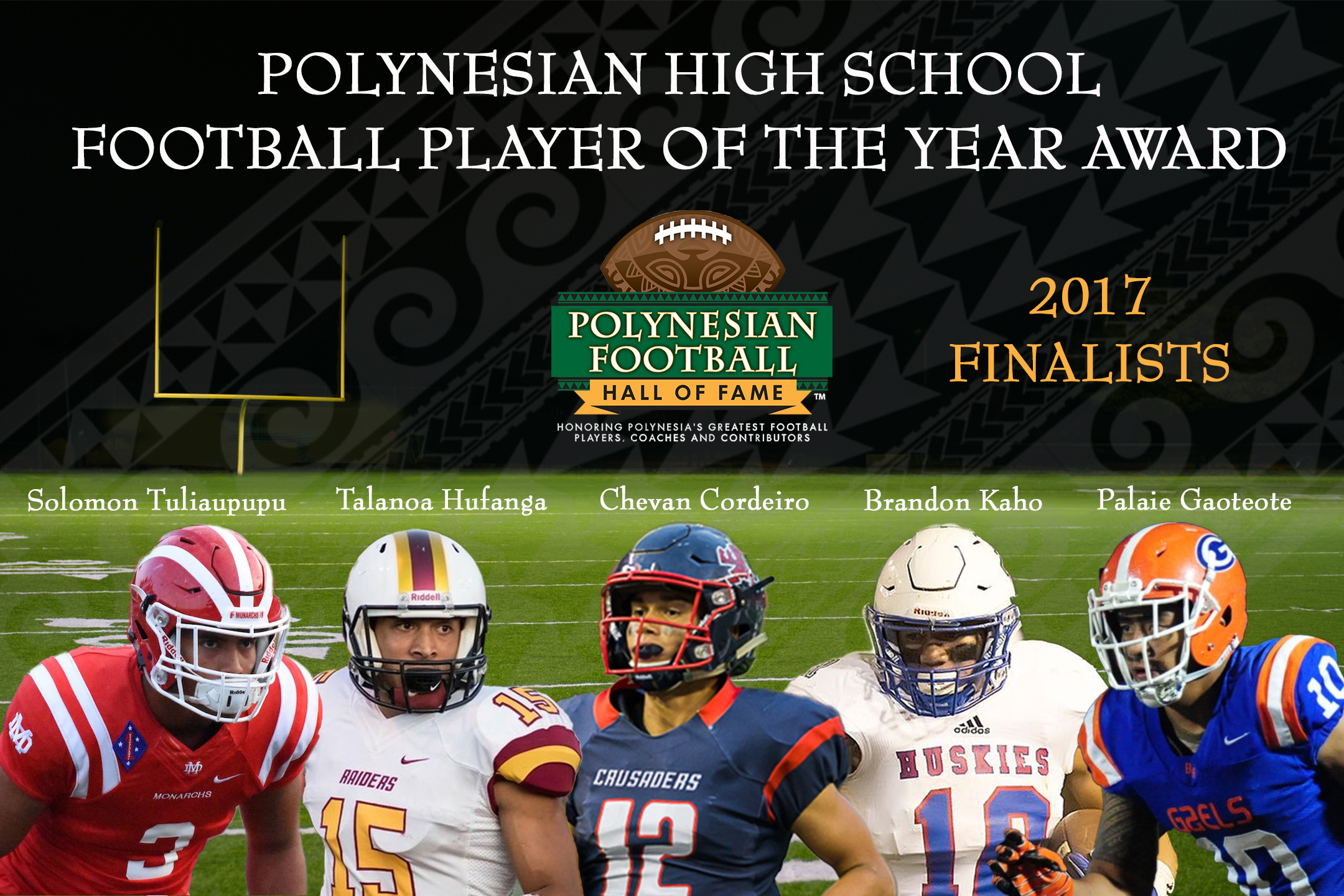 “The Polynesian influence in football is rapidly expanding and at an all-time high,” said Jesse Sapolu, Chairman and Co-Founder. “This award showcases the immense talent of our Polynesian student-athletes in high school football today.”

Linebacker … Samoan Ancestry … Bishop Gorman Gaels (Las Vegas, NV) … Led the #7 nationally ranked Gaels to a 13-2 season and the Nevada State 4A Championship … Finished the season with 72 tackles and 16.5 tackles-for-loss … Ranked nationally as the #1 ILB in the Class of 2018 … Ranked as the overall #1 player in Nevada … Finalist for the 2017 Butkus Award as the nation’s top high school linebacker … Selected to play in the 2018 Polynesian Bowl.

Athlete … Tongan Ancestry … Crescent Valley Raiders (Corvallis, OR) … Led the Raiders to a 9-2 season and advancing to the OSAA 5A Quarterfinals … On offense, he rushed for 490 yards and had 35 receptions for 696 yards (18 touchdowns) … On defense, 44 tackles and four interceptions … Ranked nationally as the #1 ATH in the Class of 2018 … Ranked as the overall #1 player in Oregon … Selected to play in the 2018 Polynesian Bowl.

Athlete … Tongan Ancestry … Reno Huskies (Reno, NV) … Played offense, defense and special teams … Led Huskies to a 10-2 record and advancing to the Nevada State 4A semifinals … Named Northern 4A All-Region Player of the Year … Named First Team All-State running back, defensive end and punter … Ranked nationally as one of the top players in the Class of 2018 … Selected to play in the 2018 Polynesian Bowl.

Linebacker … Samoan Ancestry … Mater Dei Monarchs (Santa Ana, CA) … Led the #1 nationally ranked Monarchs to a 14-0 record and the California Southern Section Football Championship … Finished the season with 63 tackles and 12 tackles-for-loss … Named the 2017 Butkus Award winner … Ranked nationally as one of the top linebackers in the Class of 2018 … Selected to play in the 2018 Polynesian Bowl.

The Polynesian Football Hall of Fame honors Polynesia’s greatest players, coaches and contributors. It also serves as a resource for Polynesian football history and provides scholarships for Polynesian youth. Its permanent home is located at the Polynesian Cultural Center (O’ahu’s North Shore) and was established in 2013 by Super Bowl Champions Jesse Sapolu and Ma’a Tanuvasa. Other board members include Troy Polamalu, Vai Sikahema, June Jones and Reno Mahe. For more information, visit our website at www.PolynesianFootballHOF.org, like our Facebook page, or follow us on Instagram and Twitter @PolynesianFBHOF.

ABOUT THE POLYNESIAN BOWL

The Polynesian Bowl is a premier high school football all-star game featuring 100 of the world’s elite football players, of which a majority are of Polynesian ancestry. The game will be played Saturday, January 20, 2018 at Aloha Stadium on O`ahu, Hawai`i during the Polynesian Football Hall of Fame Enshrinement Weekend.  For more information, visit our website at www.PolynesianBowl.com, like our Facebook page, and follow us on Instagram and Twitter @PolynesiaBowl.