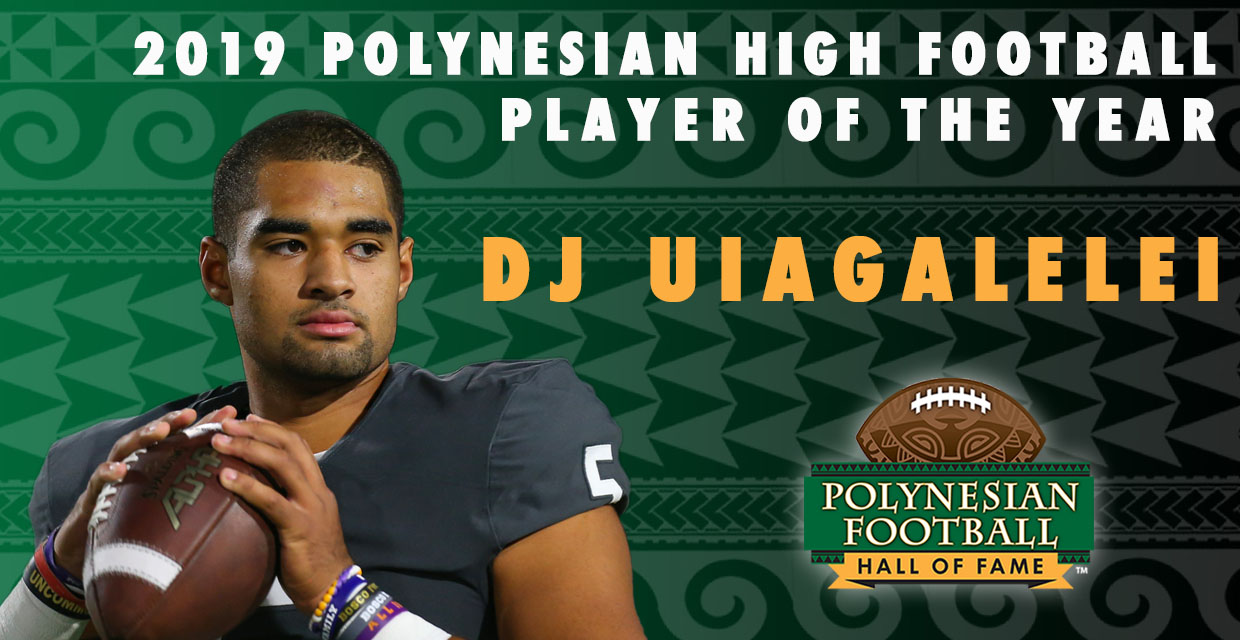 Honolulu, HI (January 17, 2020) – DJ Uiagalelei has been selected as the 2019 Polynesian High School Football Player of the Year.

The Award is presented annually to the most outstanding senior high school football player of Polynesian Ancestry. Crescent Valley High School (Corvallis, OR) and current University of Southern California Safety Talanoa Hufanga was selected as the inaugural recipient of the Award in 2017. University of Washington WR Puka Nacua & University of Alabama QB Taulia Tagovailoa were selected as co-players of the year in 2018.

DJ Uiagalelei, of Samoan Ancestry, led the St. John Bosco Braves (Los Angeles, California) to a 13-1 season and declared the 2019 MaxPreps  National Champions. In his senior year, he completed 222 passes for 4,225 yards and 48 touchdowns. He also rushed for 412 yards and 8 touchdowns. Uiagalelei is rated as the Number 1 Pro-Style Quarterback in the class of 2020. He was selected to the 2020 Polynesian Bowl. He will be playing college football at Clemson University.

The Players of the Year will also be recognized during the Polynesian Bowl (Aloha Stadium) on Saturday, January 18,  which will air LIVE on CBS Sports Network (7:05pm HST).

The Polynesian Football Hall of Fame honors Polynesia’s greatest players, coaches and contributors. It also serves as a resource for Polynesian football history, provides academic scholarships and supports educational programs for Polynesian youth. Its permanent home is located at the Polynesian Cultural Center (Laie on O’ahu’s North Shore) and was established in 2013 by Super Bowl Champions Jesse Sapolu and Ma’a Tanuvasa. Other board members include Troy Polamalu, Vai Sikahema, June Jones and Reno Mahe. For more information, visit www.PolynesianFootballHOF.org.